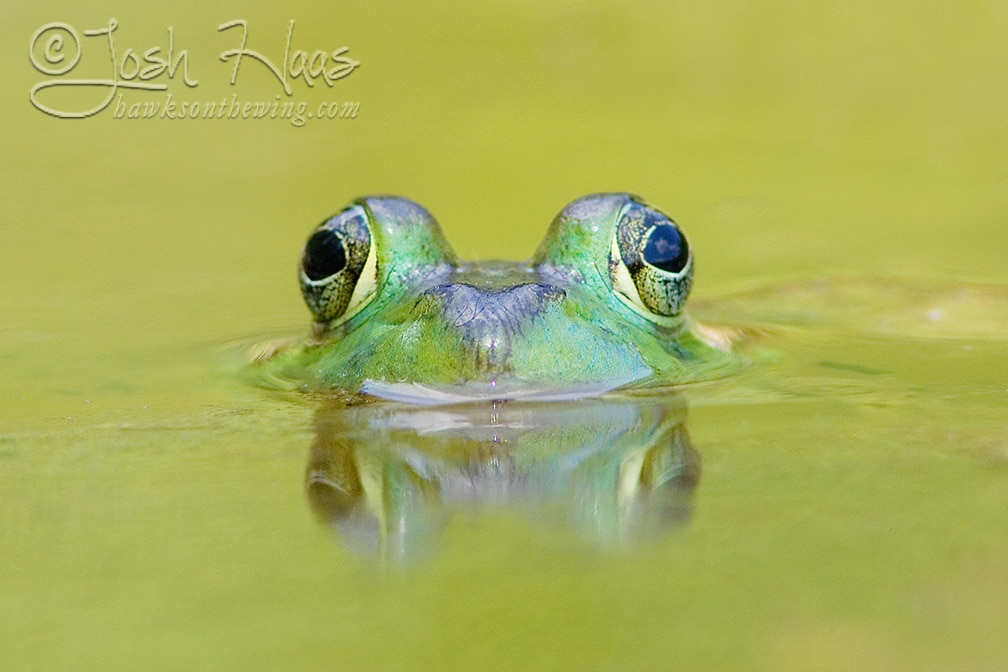 When it comes to Frogs in the Midwest, one of the most often heard and easiest to find is the Green Frog (Rana clamitans melanota).  Like most frogs, from dusk to dawn lots of calling can be heard and if stumbled upon slowly, this common frog will sometimes stay put for nice looks.  They have what I view as one of the more classic looks for a frog.  One of the distinguishing marks on a Green Frog is the tympanum (round spot behind the eye) which is actually larger than the eye in males.

A more striking stance this common frog can display is the top of its head with eyes popping just above the water.  When seen from above, the look is pretty standard but when looking at the level of the frog it completely changes the view and adds quite a striking appearance to this large aquatic frog.  This is a great tip for any hobby nature photographer.  Getting low is the first thing to do when photographing any wildlife that spends its life near the ground.  To illustrate my point, look at the photo below (left side) which was the first image taken of the very same frog.  Once I realized what I had done, I was able to lay down low and get the final shot mere seconds later (right side below).  What makes this tip so gratifying is how easy it is to implement.  There is now complicating camera technique to master here.

Typically found in and around lakes, rivers, and ponds Green Frogs are often seen at water’s edge waiting for prey items to come their way while also trying to avoid predation by predators like dabbling ducks, herons, and some raptors.  They feed mostly on aquatic and terrestrial invertebrates such as beetles, spiders, flies, grasshoppers, and caterpillars but they are opportunistic.  Being able to adapt opportunistically is probably why this frog has done well even among areas of habitation by humans.

Interestingly enough, during colder months and throughout most of the winter Green Frogs hibernate underground in moist soils or underwater.  During these cold times, all we can do is dream of warm summer evenings in July and August where the droning Green Frog serenades us to sleep each night with its banjo twang.