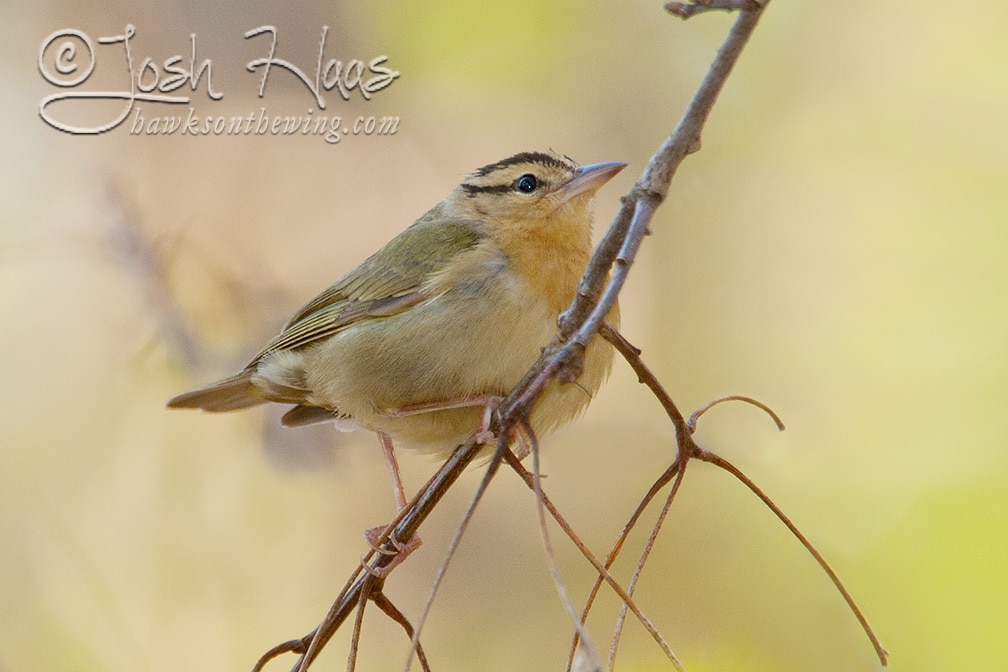 When hearing the word Warbler, most think of tiny colorful birds that eat insects high in the forest canopy.  While most Warblers match this description perfectly there are some that work a little harder to be different.  Worm-eating Warblers are one of these specialists that has a more unique type of prey and typically known to be “rare” in Michigan as they typically prefer the southern locales.  However, in early Migration certain conditions can occur that cause them to “over-shoot” and end up further North than normal (at least for small periods of time).

Several years ago, living in Michigan, a rumored Worm-eating Warbler perked our interest.  It’s usually hard for non-birders to understand that a drab little bird such as this will drive people to go after just a glimpse but once the birding bug is caught, it’s a whole different story.  As soon as life allowed, we hit the road in hopes that the bird would still be present.  Upon arriving I popped out my iPhone and quickly brought up one of my favorite apps, none other than Audubon Field Guide to Birds.  We quickly learned how the bird is typically found lower in the forest and forages near the ground in leaf clutter (this tip is what ultimately aided in finding the bird).  As we slowly walked, we searched all the areas where the bird had been seen in the previous couple days.  Much to our disappointment, there was nothing to be found except what seemed like hundreds of White-throated Sparrows all acting like Worm-eating Warblers.  Well beyond all the known spots for this particular bird, we’d almost given up hope but I noticed some leaves moving close by.  Well away from all the spots previously seen, it was a difficult task to check this activity as it was very reminiscent of the many White-throated Sparrows that tricked us before.  Luckily, persistence prevailed and out of the leaf clutter the Worm-eating Warbler appeared.  I called everybody over and we enjoyed the feeding behaviors of this bird for more than 20 minutes.

So why is this insect-eating bird called a Worm-eating Warbler?  One of their sought after meals is that of the small larvae of moths.  While this bird tends to stay low to the ground in search of these larvae and other bugs, it was evident to us they will also pop up into felled Oak Trees to pick insects out of the still-hanging leaves even 20-30 feet up.  Field Guides are an absolute necessity to birding and learning about the species you’re after but don’t forget the birds don’t have the pleasure of reading these books/guides.  Sometimes, their “off” behaviors surprise us.  Spend more time watching the bird and getting as many field marks and different behaviors in your head before attacking your field guides to figure out I.D.